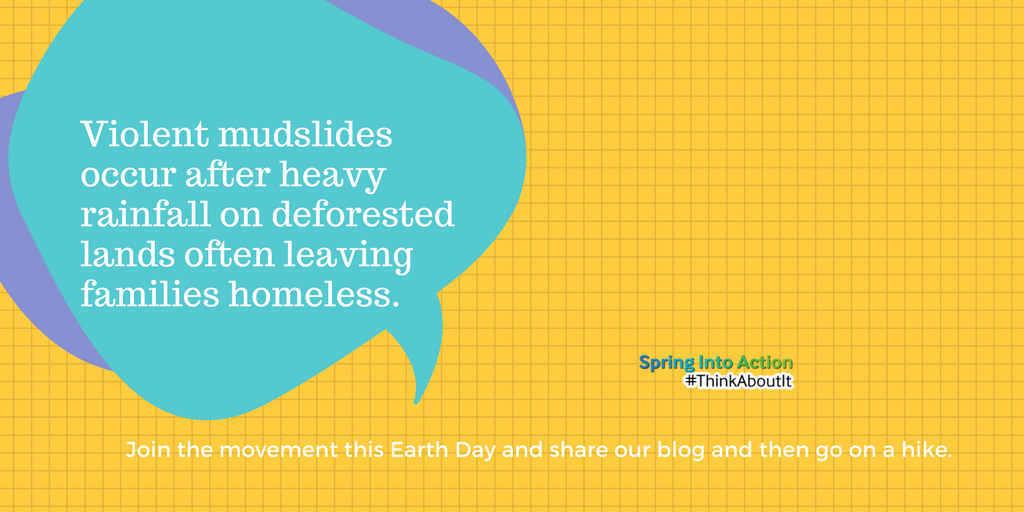 As part of the Spring Into Action campaign running from April 16 – May 1, we will be posting daily about topics related to extreme poverty and how anyone and everyone can join the movement to end it.

According to an assessment produced by the United Nations Development Program, a failure to protect environmental systems is undermining much of the progress that has been made in helping the world’s poorest communities. A sustainable environment means a sustainable human habitat.

In many rural areas of the world, deforestation can and does have a negative impact on the environment. The most dramatic impact is a loss of habitat for millions of species. Eighty percent of earth’s land animals and plants live in forests, and many cannot survive the deforestation that destroys their homes. Deforestation also drives climate change.

Deforestation occurs for multiple reasons: trees are cut down to be used for building or sold as fuel, sometimes in the form of charcoal or timber, while cleared land is used as pasture for livestock and plantation. The removal of trees without sufficient reforestation has resulted in habitat damage, biodiversity loss, and aridity. It also has adverse impacts on biosequestration of atmospheric carbon dioxide. Deforested regions typically incur significant adverse soil erosion and frequently degrade into wasteland.

The CHOICE objective is viable reforestation and plant production on the same area of land, promoting sustainable diversification in communities where deforestation has occurred.

CHOICE’s commitment to implementing a reforestation project begins with (1) training villages about the harmful effects of deforestation and (2) introducing clean stove alternatives to wood-burning stoves.

The project impacts the environment by promoting agricultural diversification and achieving sustainable production. The goals and objectives of any CHOICE reforestation program would be to address the following:

Join our movement to End Extreme Poverty and enjoying Earth Day by sharing this blog and going on a hike or a walk. After you share the blog and while you're on a walk, snap a photo and tag #ChoiceHumanitarian when you share.